skip to main | skip to sidebar

UPDATE
I was always a bit skeptical about this bird being a Common Loon / Great Northern Diver, but equally skeptical about it being an Arctic Loon / Black-throated Diver. Many features of Great Northern are clearly missing, while some features do not match Black-throated. I find the colouration on the back of the neck particularly significant as it apparently does not occur in Black-throated but can be explained by moult and feather aging when we call the bird a Great Northern.
However, my current hypothesis is a different one: this bird might be a Black-throated Diver of the Siberian subspecies viridigularis (I am NOT talking about the Pacific Diver!).
This subspecies is considerably larger than the nominate Black-throated and has a more Great Northern "feel" to it. Furthermore, I have checked the Internet for pictures of viridigularis and it might be possible that this form does occasionally show the neck pattern that has me so confused.

Here are some links I found.

Preface
Bird names again. Although I returned to the old stompin' grounds of the Olde Europe quite some time ago now, I am aware that this (or rather its big brother Belltower Birding) is still largely a North American blog. Therefore, whenever there is a discrepancy between the North American and the British name for a bird, I am perplexed.
I have now decided to follow the following rule:
When there are two differing names for the same species on both sides of the Atlantic, I will use the one of the side the blog's story is centred on. Therefore, if I blog about Gavia immer in North America, I'll write about the Common Loon, but if my blog post is about an observation of Gavia immer from the coasts of Europe, I'll refer to it as Great Northern Diver.

This post is thus about a potential Great Northern Diver (= Common Loon) and the potential identification pitfall, the Black-throated Diver (= Arctic Loon).
Geez, this was a long and complicated thing. I really wish you guys could pull yourselves together and agree on internationally valid English names for the birds of the world.


Okay, here's the thing this is all about:


Main Story
As I haven't told you already, I spent three enjoyable weeks vacationing on the German Baltic coast, mostly the lovely small town of Binz on the island of Rügen at the end of October / beginning of November 2009.

Right at my first day at the Binz jetty at the end of October, I noticed a diver (Gavia, you know, a blinkin' LOON if you so wish) that was pretty close. Expecting it to be a Black-throated, not an uncommon sight there but always nice to see, I completely focused on taking pictures with my shabby Sigma 70-300 mm (look, it's not shabby for the low price I had to pay for it, but it sure ain't no Canon and it doesn't exactly outperform itself at distances of more than 10 metres. Close-ups are okay though, see my Crane Creek pictures from May and June 2007).

After bringing his majesty Young Belltower Birder to bed that same evening, I sat down, enjoying the calm and checking out my Black-throated diver pics on the display of my camera. Immediately upon zooming in, I noticed the huge fat bill, fit to seriously kick some fish butt, and the peculiar pattern on the pale grey-brown nape: a black half-necklace (not reaching onto the white throat) with a very thin yet precisely defined black line up the neck towards the crown.

This really smelled like a Great Northern Diver, a species however that is extremely rare along the Baltic coast of Germany (although it is seen on off-shore surveys rather frequently, I am not aware of observations from the coastline each year and would guess one shows up in coastal waters every three years or so).

I was able to watch it frequently - whenever I was able to pull myself away from the shops (or rather get away from my wife at the shops?) - until I left Binz in the first days of November.
In case you want to see it yourself, I am sure it is still there and the flight from, say, New York to Berlin will take around 10 hours plus a three and a half hours drive to Binz, let me see, dang, you could be there tomorrow - easily.


Now, upon checking my pictures more thoroughly on a laptop monitor, I am still rather convinced it is a Great Northern Diver, yet a few things don't add up, so here are my thoughts on its identification:

It clearly is a juvenile bird.

Features of a Great Northern Diver I do not see, or features that would support an ID as a Black-throated Diver:

a) The bill is strong and appears a bit too strong to be within the variation of Black-throated, yet it appears slightly down-curved which is a feature I associate more with Black-throated than with Great Northern.

b) The head profile is very flat and does neither show the steep forehead, nor the "bump" of the Great Northern.

c) The feature Sibley refers to as "jagged neck marking", an indentation of the white forehead into the dark nape, is completely missing. However, the whitish cheeks do extend into the dark nape somewhat, which is a feature associated with Black-throated.

d) There is no white around the eye.

e) There is a white patch on the rear flanks which suggests Black-throated rather than Great Northern.


Well, after reading this one might wonder just what has me still convinced it is a Great Northern Diver? And rightly so as well. So here are my points in favour of the rarity:

a) That bill is a huge thing, really impressive, downcurved or not.

b) I hardly ever saw the bird in direct comparison to other water birds, and judging size at sea is a near impossibility. However, its movements when diving were impressive, much like a submarine and not a bird at all. I once had it rather close to a swimming cormorant (Phalacrocorax carbo sinensis) and the mystery Gavia did appear significantly larger than it, I would say the body appeared almost double the volume of the cormorant, but there was no direct comparison, not a side-by-side thing in the same field of vivion, so I could be wrong - but I strongly doubt that I am.

c) The colouration of the hind neck / nape, with a black semi-necklace and that black line going up the nape's centre towards the crown is - in my opinion - a very strong argument for Great Northern.

Okay, now it is your turn:
I would strongly appreciate any kind of opinion on the bird's identity (preferably containing not only the what but also the why).
I would like to particularly encourage those to speak out who are in favour of it being a definite Pacific Diver, a first for Germany and a lifer for me - although I know it is not. But you know, in some cases I can be quite a push-over...

Thank you, cheers and settle on some pan-Atlantic bird names, will you?

Picture of the peculiar neck colouration: 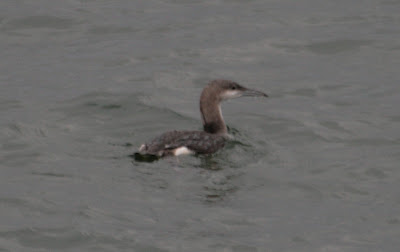 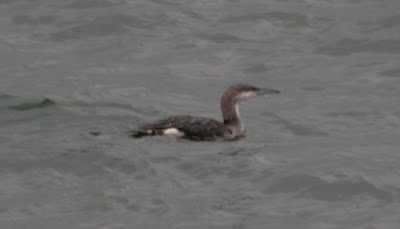 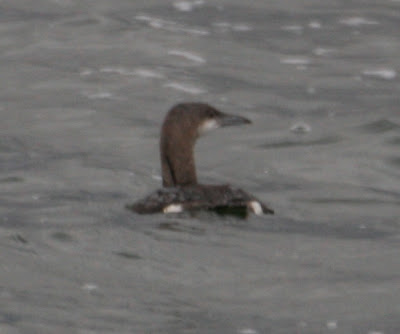 Throat view, no dark necklace but that could be photo-shopped if the rest fits Pacific Diver.
You know - yet again: Jocking. Of course. 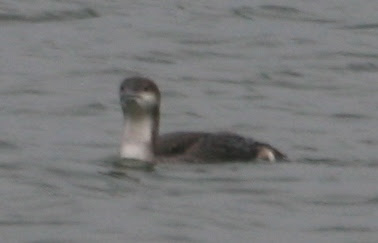 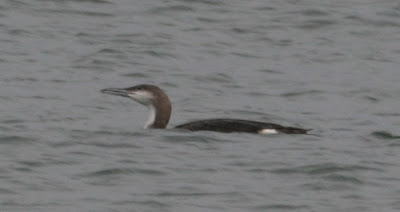 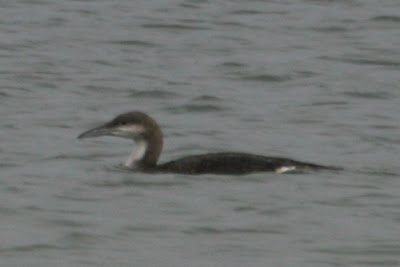 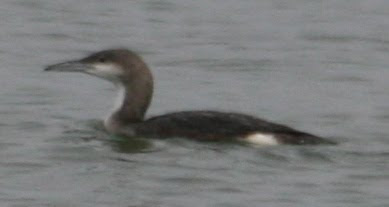 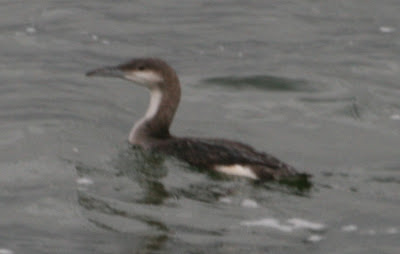 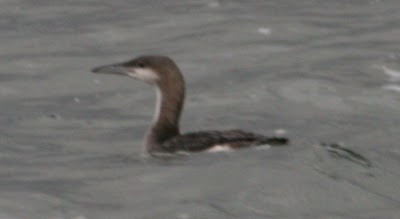 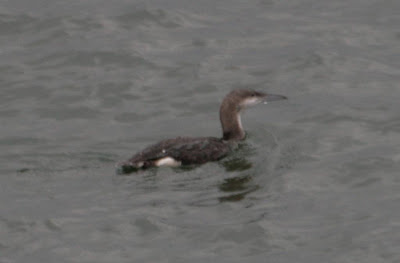 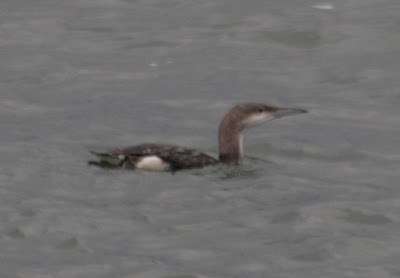 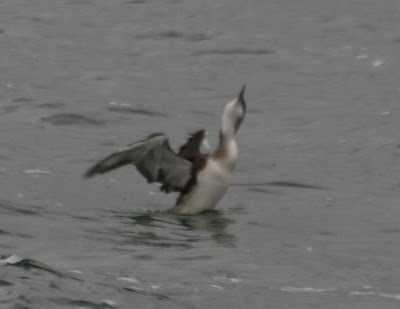 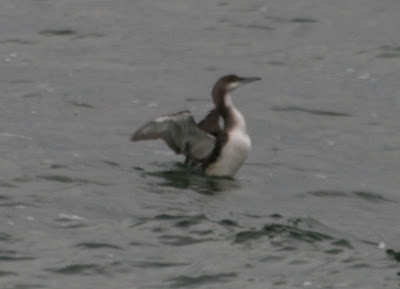 My Other Blog - more links there